Homepage
Blog
Comment on Ram 1500 EcoDiesel to Return in 2019, Already Claims to be Efficiency King by Peter Vermes Comment on Ram 1500 EcoDiesel to Return in 2019, Already Claims to be Efficiency King by Peter Vermes 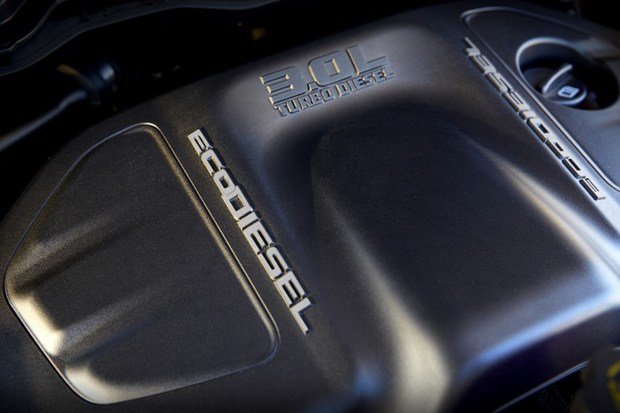 When the all-new 2019 Ram 1500 launches later this year, it will do so without a diesel offering, but the brand is already making bold promises when the oil burning engine returns.

Ram says that the EcoDiesel is returning in 2019, and when it does, it will reclaim all of its current titles in the half-ton segment. Reading between the lines, this means the company expects the truck to be the market’s most efficient half-ton.

In typical Detroit Three fashion though, that claim already has challengers. During its presentation at the debut of the new Silverado, Chevy promised that its new 3.0-liter Duramax diesel in the Silverado would “outperform” the diesel in the Ford F-150, which for its part, made a very specific claim that it will return over 30 mpg.

With these three automakers all turning to diesel for their half-ton models, the competition is heating up, especially because the truck segment is absolutely booming. In the never-ending quest for sales supremacy, the chest thumping by the Detroit Three seems to be a book with no final chapter. Once one brand makes a claim, the other two rush out to try and beat it. It’s a classic case of “anything you can do, I can do better”.

At GM, the 2019 Chevrolet Silverado 1500 was launched with the promise of a 3.0-liter inline-six Duramax turbodiesel being an option under the hood. While specific power and efficiency specs weren’t released, the company did say it will be mated to their Hydra-Matic 10-speed, giving it the appropriate number of cogs to maximize fuel economy.

Ford also busted onto the diesel scene at this year’s Detroit show with a PowerStroke-equipped F-150. In a break from its crosstown rivals at Chevy, Ford showed its hand and released performance metrics for its new diesel engine. It will mimic Chevy’s (and Ram’s) 3.0-liter displacement but is a V6 layout instead of an inline unit with all the cylinders lined up like toy soldiers. The 3.0L PowerStroke will make 250 hp and 440lb-ft, shuffling power to its wheels by way of a ten-speed automatic. Sound familiar? It should. The Chev also has ten cogs in its box. In fact, Ford & GM collaborated on building the unit. Strange bedfellows, indeed.

Maxed out, this combination will be good for a tow rating of 11,400 lbs, says Ford. Going out on a limb, the company pegged fuel economy of at least 30 mpg. One can be assured the truck will meet or exceed this figure, as there’s no way Ford would’ve put that number out there if they didn’t think they could achieve or surpass it.

That leaves Ram. If the gasoline engines for 2019 are any indication, there is no reason to expect power rating to change much for the new model year. In 2018, the EcoDiesel put down 240 hp and 420 lb-ft by way of an eight-speed automatic. This was good enough for 27 mpg on the highway.

When the new 2018 Jeep Wrangler was revealed, the brand said the 3.0-liter EcoDiesel engine (which is also returning to the Jeep in 2019) will make 260 hp and 442 lb-ft of torque. This is a pretty strong indication of what the Ram will make.

Here’s why I’m not convinced Ram will take the efficiency crown. Both of the gasoline-powered engine soldier on with an eight-speed automatic, two gears shy of the unit found in the Ford and Chevy. While it’s true most drivers rarely see the tenth gear in daily driving, those two extra super tall gears work wonders on the EPA fuel economy test cycle. For Ram to earn top honors with an eight-speed transmission would be remarkable.

Someone has to win. You can be sure the Detroit Three will be watching each other closely, trying to determine who has the upper hand. We’ll be testing all three of these machines this year, so stay tuned for our real-world results. Comment on Ram 1500 EcoDiesel to Return in 2019, Already Claims to be Efficiency King by Peter Vermes Read more
Read All Posts

Comment on Ram 1500 EcoDiesel to Return in 2019, Already Claims to be Efficiency King by Alex

thechromepros
When the all-new 2019 Ram 1500 launches later this year, it will do so without a diesel offering,...
Read more